Skip to content
Just got an email from Peter McCarey with an update on his Syllabary project!:
Dear Aiko,
Six months later, the collaborative syllabary site is up – called Cleikit, it’s at scran.ch or cleikit.com, with cleikit@scran.ch as the e-mail address for anyone interested in it.
Best,
Peter.
I gave that link a whirl and WOAH!  Great to see the project coming together!
I’ve explained the Syllabary a bit ago when I first found out about it: here.  So do go check back if you need a refresher.  There’s also information on how YOU can get involved too!  Just email Peter at the address above (cleikit@scran.ch) and he will assign you a phoneme of your own for the collaborative Syllabary.  Ken Cockburn described the project in his post as, “An ongoing, accumulative sequence of short poems each based on a single phoneme (consonant+vowel+consonant)”. 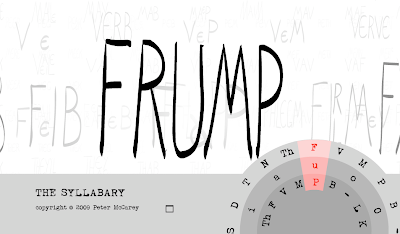 With this in mind, Peter assigned me the cell for ‘FuP’, which includes the words ‘frump’ and ‘flump’.  You can hear me reading my poem ‘June, July or August‘ by spinning the phoneme wheel to F – u – P.

You can also hear Ken Cockburn’s poem ‘Norm’ at N-o-M, and my good friend Ryan Van Winkle‘s poem at F-i-P.

Please do give it a spin and listen, and definitely email Peter to try writing a poem yourself!

One thought on “The Syllabary: FuP now online!”